Keep up with Wella Professionals 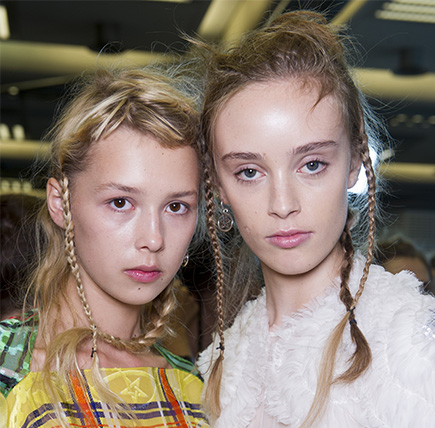 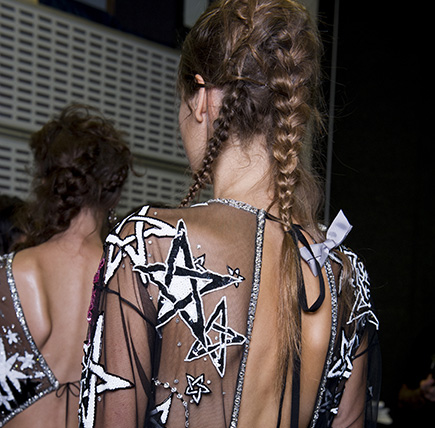 There was a pagan mood at Preen by Thornton Bregazzi’s SS17 collection, with pentagons dominating the London-based duo’s designs. It solicited a free-spirited response from Eugene Souleiman.

Eugened explained that “the concept of the show was loosely based on a coven of witches – good witches, obviously. I felt a very pagan influence in terms of styling the hair, and I thought it should have a medieval, Saxon feel to it. For me, that means braids. I imagined the models as a coven of dark, ethereal women, and I gave them hair that was raw, but also ornate.” 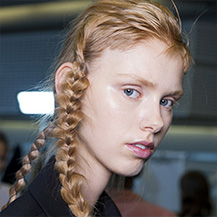 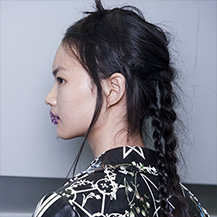 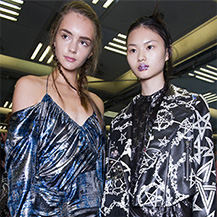 Inspired by music festivals, Eugene created folk-style, outdoorsy hair. It was messy and organic rather than salon-smooth, with four different braids – bound, three-strand, four-strand and blanket-stitched – creating a mash-up of styles. Every model’s hair was different.

About the inspiration, Eugene shared: “There’s a feral influence coming into fashion. For so long, things have been clean, homogenised and – dare I say the word – boring. But this is very different, there’s nothing perfect about this look. It should feel imperfect and lived in. I wanted the models to look as if they hadn’t done their hair in front of a mirror, like they’d done it outside, at a festival. I wanted beautiful mistakes.”

To create texture, Eugene sprayed EIMI Sugar Lift into the roots, and massaged the hair with his hands.

“EIMI Sugar Lift creates a gritty texture that you can massage to create a base to work with. You need the right, light texture to be able to make the hair malleable, so that you can push into places and it will stick and stay there. This is “human” hair styling: no curling iron, no straightening iron, nothing to force the hair to do anything mechanically. Not even a comb. I did everything with my fingers and with EIMI product, that’s it. No powerpoint required.”

Eugene wanted the braids wispy and raw-edged – no neatness was allowed. He sprayed them with EIMI Dry Me, to give what he called an “arid” finish, allowing him to loosen up the plaiting and create messiness. “Braids and hair up can look very bridal, which I didn’t want. Nothing romantic. This had to have a starker, more assertive vibe. The hair felt quite shiny, it didn’t have enough texture, so I sprayed EIMI Dry Me – which is a product I absolutely love – onto the braids. I wanted to encourage all of the soft, loose bits of hair to stick out, I didn’t want them smoothed down. As I said, it was all about encouraging imperfection, and giving the hair a raw, textural feel.”

Providing abstraction and surprises in unusual places, this look is one of Eugene’s favourites. He explained: “Wherever you looked around the head, there was always a point of detail. The days of the perfect blow-out are well and truly over and we’re approaching a more bespoke, artisanal feeling to hair. It’s more about the craft.” 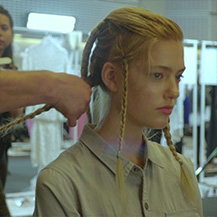 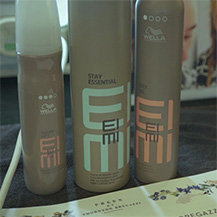 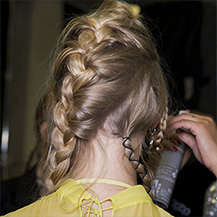 Watch the video tutorial now to recreate the look: